I had no idea what to expect before traveling to Japan.  It was the farthest East I’d ever be going.  Visions of silk kimonos, noodle soup, kids practicing Karate, dirty underwear in vending machines and sushi counters flashed through my head…. basically everything stereotypical of the country.  Prior research on travel tips for Japan clued me in on what more to expect.  But after my recent visit, I recommend reading the list below.  The tips will help you save both time and money as well as prepare you for some need to knows.

*For the record, I didn’t come across any perverse items in vending machines 🙂

Before you scroll down to see my Important Travels Tips for Japan, check out this 2 minute video highlighting our 15 days there

You Don’t Necessarily Need A JR Pass Even Though Everyone Tells You To Get One!

Railway travel in Japan is friggin expensive but do the math first to figure out if you need to buy one of these passes. It took me a few tries with some research and calculations to figure out we wouldn’t be saving ANY money by purchasing the Japan Railway Pass (JR Pass).  It all depends on your itinerary.  The 7 day JR pass wasn’t enough to cover us for our 15 days and the 14 day pass was too much for our needs.  Even the JR East pass didn’t make sense because we weren’t doing round trips on the Shinkansen (bullet train), only one ways as we went from Tokyo to Nagano to Kyoto and back to Tokyo.  The JR East didn’t cover Kyoto so, again, it didn’t work for us.  Nor did buying a JR West Pass.  I found this link the most helpful for an explanation and costs.  https://tokyocheapo.com/travel/transport/which-jr-rail-pass-to-choose/   The Kansai Pass makes a lot of sense if you’re in Kyoto and planning day trips to Osaka, Kobe, etc. 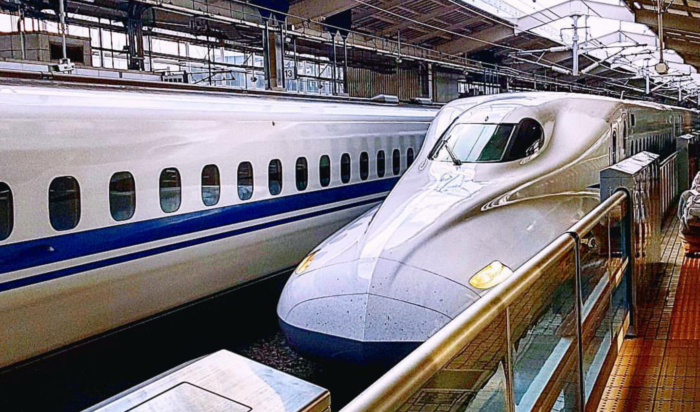 Portable Wi-Fi from the airport

WiFi is not that reliable around Japan, even in hot spots and hotels.  Not what you thought right? Grab one of these pocket sized portable WiFi thingies at the airport when you land.  You’ll see the booths after grabbing your luggage.  I paid $8 for 500MB per day.  It worked everywhere from underground in the metro to high in the mountains in every city we went.  If you exceed the daily limit, which is pretty unlikely, the connection slows.  It’s not like data plans on your phone, where your card gets billed at 50x the rate if you go over.  Return it at the airport when you leave.  You might think not having WiFi is okay but read the next point. 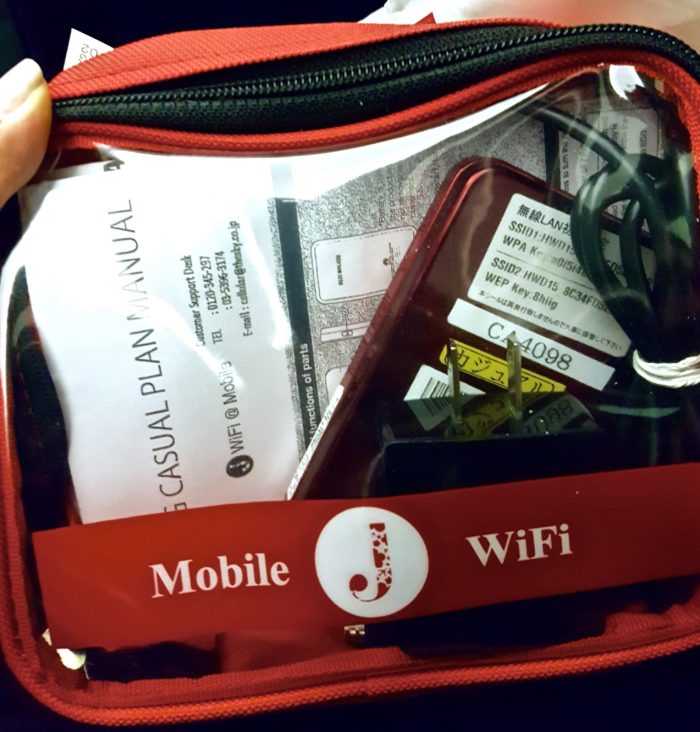 Google maps will be your best friend

Google maps is a life saver in Japan.  We used it to figure out the best routes for the railway, the metro, walking and taxi.  It was never wrong.  While street maps can be helpful, I can’t tell you how necessary Google Maps is.  It proved invaluable, especially when navigating Tokyo and locating points of interest and eateries.

Not all ATMs are created equal

The best place to get cash in Japan is at 7-Eleven, not joking.  We tried several ATMs before finding one that accepted international bank cards, even ATMs at some banks didn’t work!  Make sure the ATM says they accept foreign/international cards.  7-Eleven is always a safe bet. 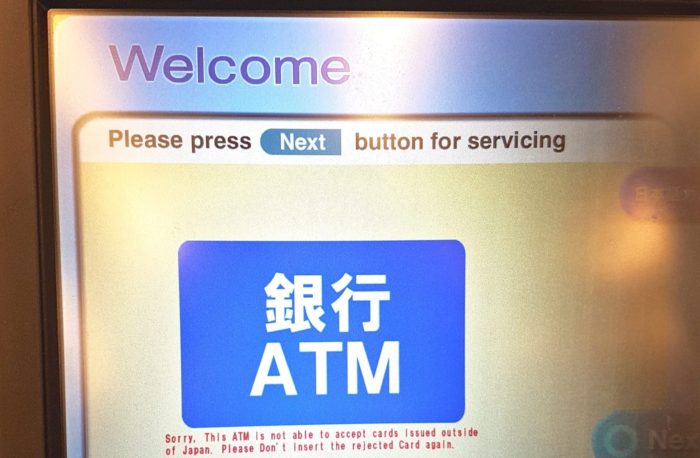 Get cash from the 7-Eleven ATMs! – Travel Tips for Japan

You Will Burn Through Cash

There are enough places which don’t accept credit card in Japan that keeping cash on hand at all times is a must.  Don’t worry about carrying cash around as there is a generally low crime rate in the country.  We never felt unsafe.  But back to the cash, don’t leave your hotel without it.  1,000 yen is equivalent to about $8.70 USD.  Check rates as this will obviously fluctuate. 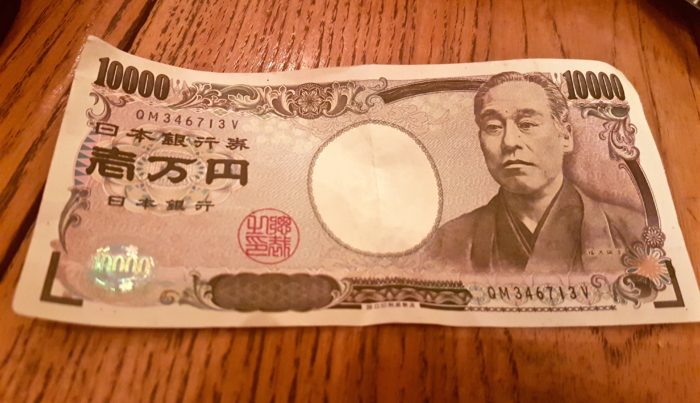 Plugs are the same as the U.S.

No need to carry adapters if you’re traveling from the States.

Tipping is Not Necessary

Don’t leave tips.  They’ll give it back to you and some may find it insulting.  I’ve heard it’s acceptable in places where you’ve received very personalized attention and care like a ryokan but this exception doesn’t include some place such as a restaurant.

Yup, you can drink water from the tap.  A luxury for me since everything comes from plastic bottles where I currently live.

Now this is a sensitive issue but after living away from the States for 9 years, I don’t know how the hell Americans survive without bidets, hand showers or toilets like the ones in Japan!  This one had both English and Japanese to explain the buttons but if you encounter one that only has Japanese, just look at the pictures.  Don’t be intimidated.  The 4 basic functions are seat warming, bidet, spray and stop.  Some also have a button for flushing.  So awesome, I wanted to take one home with me. 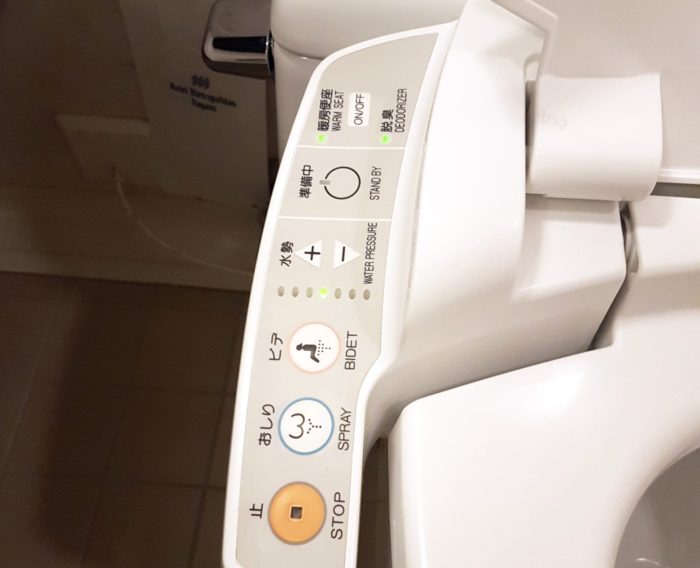 Travel Tips for Japan – Don’t Ask For Take Away

Food hygiene is big in Japan.  Looooooooooove it! But this also means most restaurants don’t do doggie bags because leftovers are not considered hygienic.  Especially applies for raw fish items of course.

Garbage Cans Are Few and Far Between

I hardly saw a trash can anywhere on the street.  Kyoto is the cleanest city I’ve ever been to.  Not one piece of garbage anywhere.  Carry your litter with you until you find somewhere to dispose of it, usually at a restaurant or shopping area or your hotel.

We noticed that Japanese eat dinner between 6-8pm so many restaurants’ last order was 9pm at the max.  This may have been a winter phenomenon but a lot of restaurants were shut by 10pm.  There were bars and some late night eateries open but usually they were ramen oriented.  Yummy but not the healthiest.  If you don’t make dinner in time, head to Lawson for ready to eat meals.  You can find at least one Lawson or a family mart every few streets.  But even stock is depleted by a certain time and not necessarily refilled until the next day.  Again, think food hygiene.

The Food is Fresh and Hygienic, Yay!

Did I mention that food hygiene is big in Japan?  🙂  You can trust that the food you’re buying is freshly made and of high quality ingredients most everywhere.  Read my post Must Try Japanese Dishes if you need an introduction to the cuisine.   I especially loved getting sushi and bento boxes from the train stations before hopping on the Shinkansen.  The eateries at the station in Kyoto and at Shibuya in Tokyo are incredible.  Multiple and expansive counters of tempura, dim sums, sushi, noodles, baked goods, desserts, whatever… it’s all delicious. 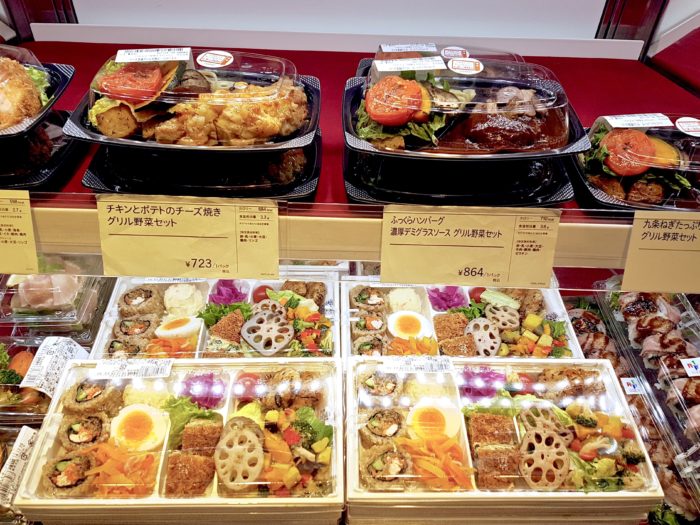 Everything Is Super Punctual

Every train schedule departure and arrival time was exact to the minute.  Don’t be late.

The Metro Is Daunting but highly efficient and logical

I had a panic attack the first time I looked at a Tokyo subway map.  But by the second day and several uses, my fear totally diminished.  The system is the most efficient and logical one I’ve come across.  Go to the machines, locate your desired stop on the map above, take note of the price listed for that stop, hit English, choose the number of people, choose the corresponding price, put money, grab ticket(s), put ticket in turn-style machine, grab ticket, find the track, hop on the train, get off the train, exit by putting ticket back in the turn-style.  If by accident you chose the wrong price, the friendly metro employee in the booth upon exit will tell you what you owe.

It’s a beautiful system.  If you have a question, just ask an employee or another passenger, they will help you.  Be sure to ask what time the metro stops running at night.  One of our stations closed at midnight or 1am, I forget, but we had to taxi it back.  And taxis are not cheap in Japan. 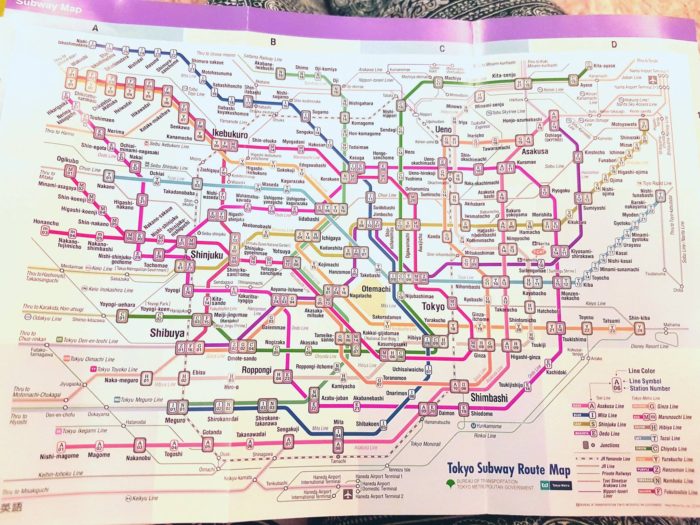 We grabbed the little handy guides in each city we visited.  You can find them in the metro.  They come with neighborhood guides and coupons for restaurants, theatre tickets and transportation.  Comprehensive and free. 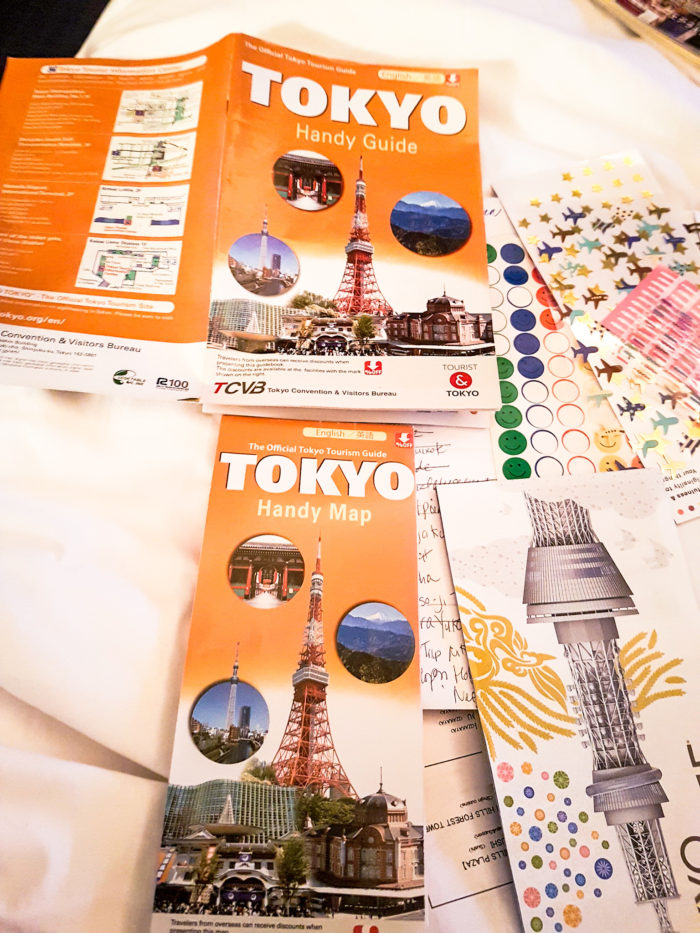 You might view this as excessive paranoia or even insulting.  But the white germ masks are also for your protection.  Lots of employees who work in contaminated areas like hospitals or those who are suffering from the flu where it so they don’t contaminate you. 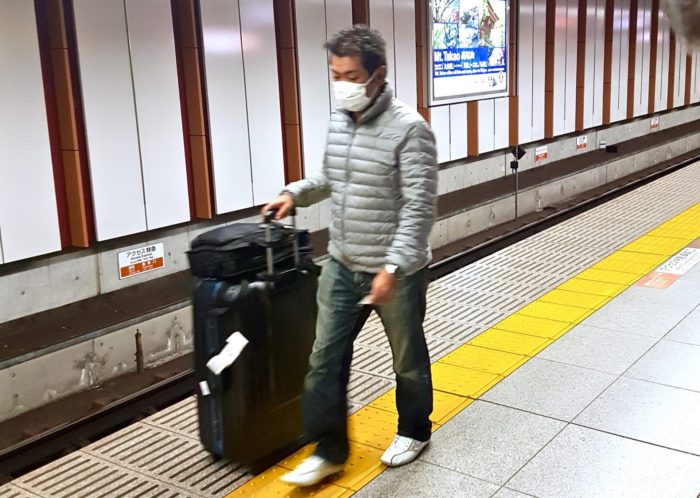 Bowing is a custom ingrained in Japanese culture and symbolizes respect.  It starts from a young age.  When someone bows to you, try to acknowledge it at least with a head nod or slight head bow.

Japan is filled with bustling metropolises.  You’ll be surprised at how quiet it remains despite thousands of people walking side by side.  Try not to draw too much attention to yourself with exaggerated movements and loud talking.

Foreigners and tourists are definitely not a new thing in Japan but locals still take notice.  We were looked at everywhere we went.  I didn’t know how to necessarily handle it at first.  I didn’t know if its because we are tall, perhaps because we’re an interracial couple or what it was.  But one thing is for certain, everyone is super helpful.

Not everyone speaks English

Don’t assume people speak English.  Many don’t.  But whichever the case, again, people will still try to help you if you have a question about directions or anything else.

Everyone’s heard of cherry blossom season.  But it’s also the most crowded time of the year.  Consider going in fall when the foliage is bright and beautiful.  We went during the holiday season.  It was slightly cold in Kyoto but not as cold as people had warned us about.   Tokyo was almost mild.  I loved not feeling inundated by herds of tourists.  The only time we felt the crowd were at some of the big shrines as New Years tradition in Japan calls for visiting one.

Bring 2 pairs actually.  You will do a lot of walking, A LOT.

Those were my 23 Travel Tips for Japan.  Feel free to ask me any questions in the comments below.

We’re Moving Out of Dubai, Here’s Why

How many days in Tokyo Do You Need?...

10 Tips You Must Know For Sri Lanka

Sunset by the docks. English Harbour, Antigua. We

Our beachfront abode in Antigua. this was the firs

Caribbean trip salvaged, all three of us are well!

Pic taken before things got crazy! We've been in N