Top Posts
Living in Italy Under Quarantine During Coronavirus
What and Where to Eat in Istanbul
7 Awesome Things to do in Musandam Oman
Best Hotel in Oman Is Six Senses Zighy...
Where to Go in Oman: A Must Visit...
Renovating or Buying Property in Italy? Read Our...
Home Destinations Sintra: More than Just A Day Trip

I wish people would give Sintra the chance it deserves.  When I hear “I need to go on a Sintra day trip from Lisbon“, disappointment takes over.  Sintra is not meant to be experienced by hopping on and off buses with herds of tourists pushing and racing.  Spend a night, or two or three here.  Sintra was a main highlight from my trip to Portugal.  Truly enchanted, a chapter out of a fairy tale book.

Take a stroll through Sintra’s alley ways, under a stone archway or an unexpected turn down winding stairs with steps protected by thick green foliage.  It may lead you to another castle or even a private residential neighborhood filled with homes from a long ago period that you wish you belonged to.  I’m convinced Walt Disney and co. channeled some inspiration from here for some of the classics.

I chose Lawrence’s Hotel for my accommodation.  The suites are beautifully appointed, elegant, charming and full of character.  It has the perfect upscale B&B feel to it, all with a great view and at a good price.  On top of that, it was steps away from my favorite castle, Quinta da Regaleira. 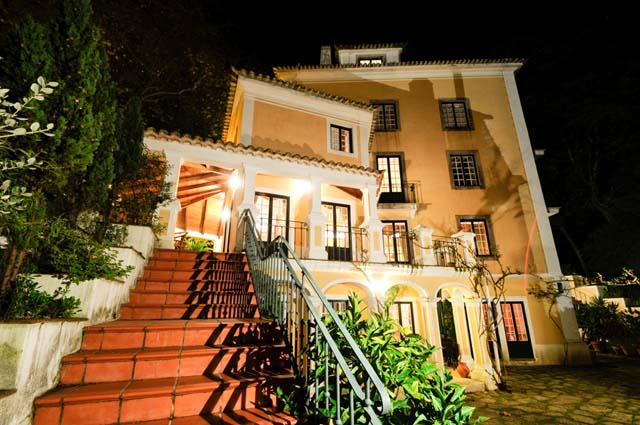 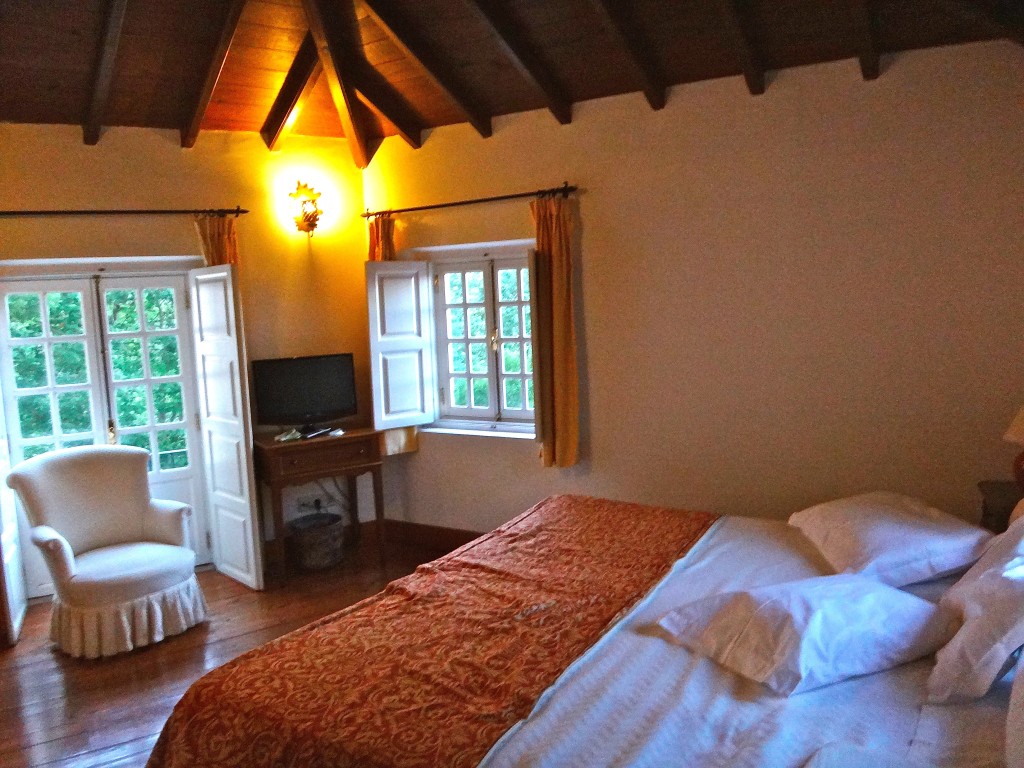 Now about Quinta da Regaleira.  I am once again going to use this descriptive adjective because it’s the only word that fully embodies its aura: Enchanted.  Much of the feeling comes from the rich grounds but also from the Manuelin architecture.  Manuelin architecture is detailed, intricate, romantic and ornate.  As quoted from Wikipedia:

This innovative style synthesizes aspects of Late Gothic architecture with influences of the SpanishPlateresque style, Mudéjar, Italian urban architecture, and Flemish elements. It marks the transition from Late Gothic to Renaissance. The construction of churches and monasteries in Manueline was largely financed by proceeds of the lucrative spice trade with Africa and India. ….The style was much influenced by the astonishing successes of the voyages of discovery of Portuguese navigators, from the coastal areas of Africa to the discovery of Brazil and the ocean routes to the Far East, drawing heavily on the style and decorations of East Indian temples. 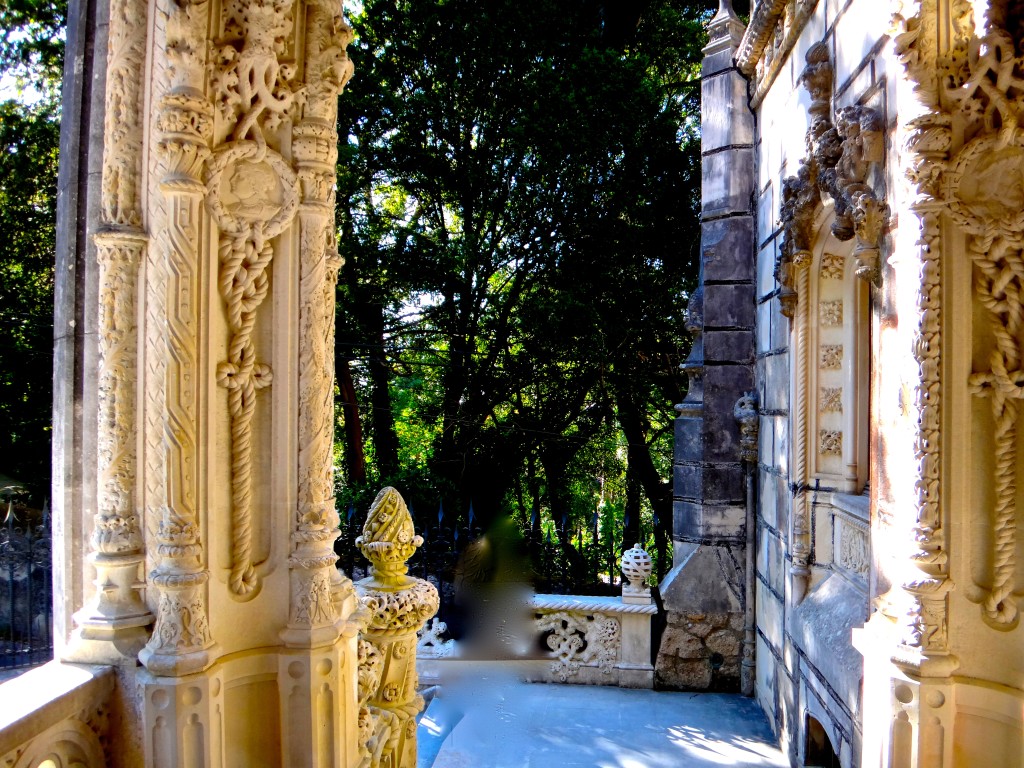 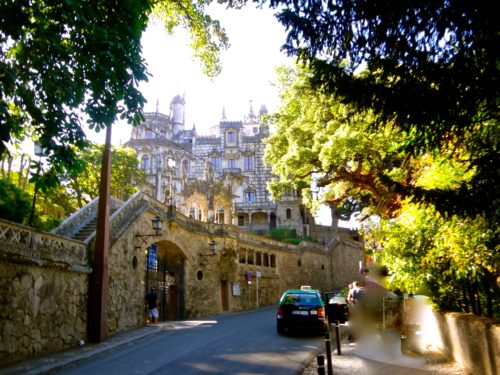 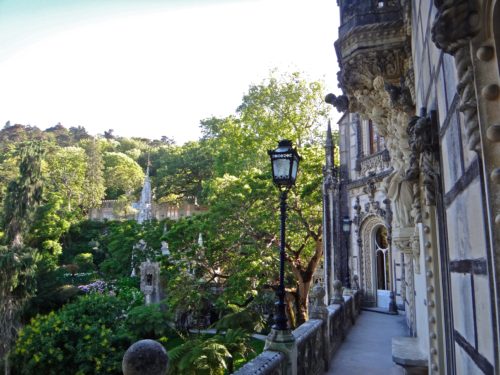 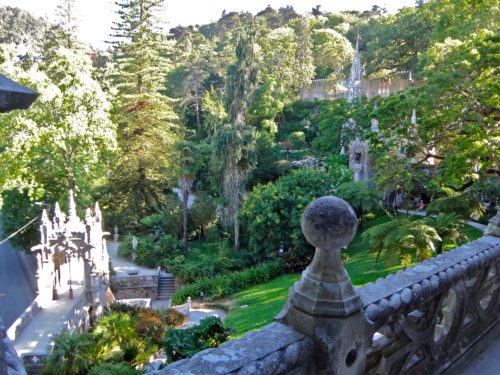 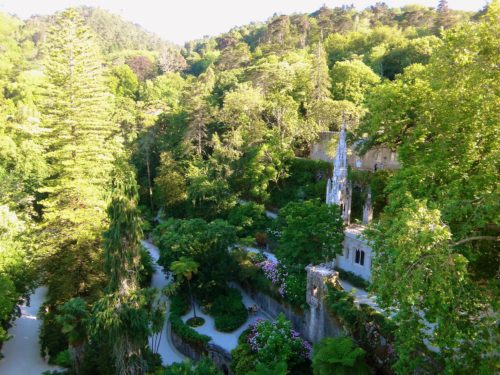 The grounds even have cave like structures which lead you through small tunnels with hidden gems to be discovered.  One could spend the whole day here.  After doing just that, my travel partner and I ventured to the town centre to grab a bite.

Where to Eat in Sintra

Sintra is small.  When we stumbled upon a restaurant right in the heart of the centre, both of us became a little weary.  Tourist trap is all that came to mind as we sat down in Cafe Paris at the Central Palace Hotel.  It was a little bit of that but only because of the slightly inflated price.

Seated outside on that fine weather day, we soaked in the sights of little shops, planted flowers and fellow travelers while enjoying a glass of Alvarinio at sunset.  The food was delicious.  I ordered octopus and he the traditional Portuguese dish of bacalao.

Many chefs have their signature spin on bacalao, this one a bit non traditional.  The chocolate tart with accompanying home made ice cream for dessert was brought to the table afterward.  This was earthy, no frills cuisine.  A great meal. 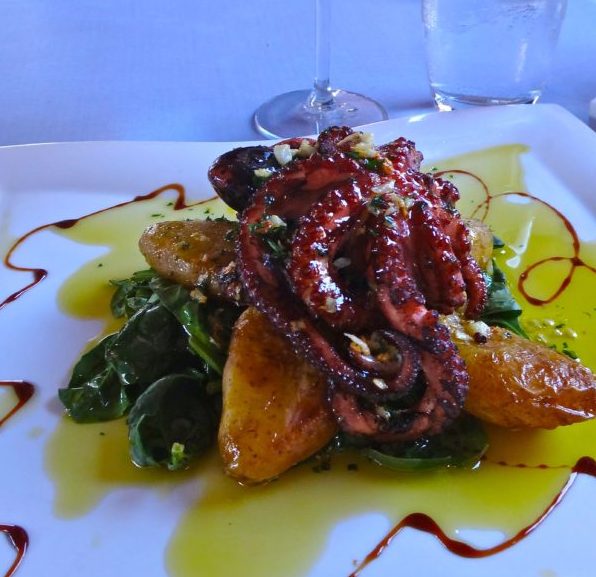 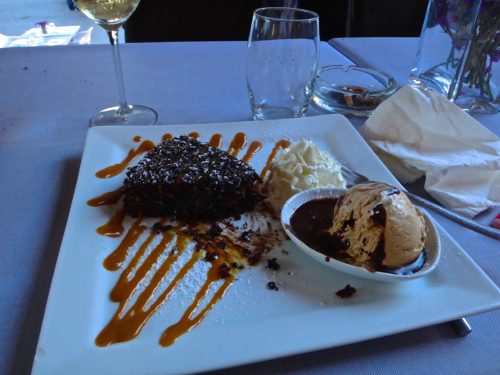 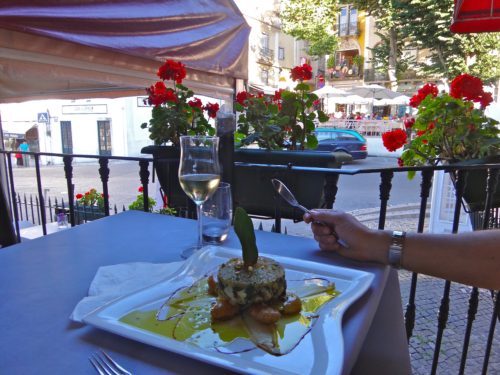 Two other restaurants I would highly recommend are Saudade (a cafe with high tourist traffic) and the one situated right at our hotel, The Lawrence’s Hotel restaurant.  Just be careful with the latter and go during regular meal times.  I showed up at 4pm once and service was very spotty with a reduced menu.  Nau Palatina is also a great option, family run restaurant with simple fare.

After dinner, we strolled along Sintra’s side streets and got lost.  I don’t know what was in the air but we sang aloud with passer byers joining in.  My legs tired from the evening as the streets and alleys are hilly in some places. 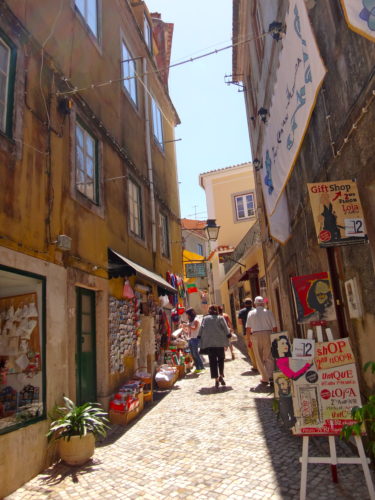 the more touristy area with little bespoke shops, steps away from town centre 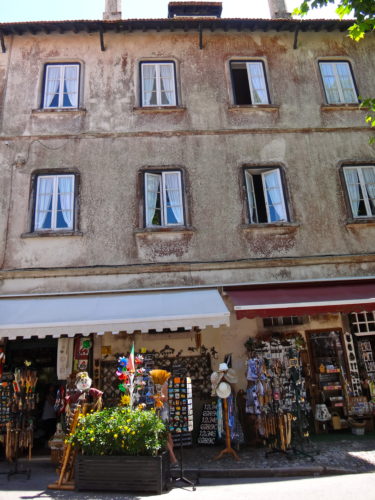 I got a bright and early start and headed to the Moorish Castle as my next stop.  I was alone this morning as my travel partner had a meeting in Lisbon to attend to.  This place really stuns.  Moorish Castle will be one of your stops if you’re doing the “Sintra day trip” but its better if you’re not bound by time.

The fortress is spectacular and shows off the best views of Sintra.  The castle itself is impressive but don’t miss the surrounding boulders, Royal Tower and walkways. 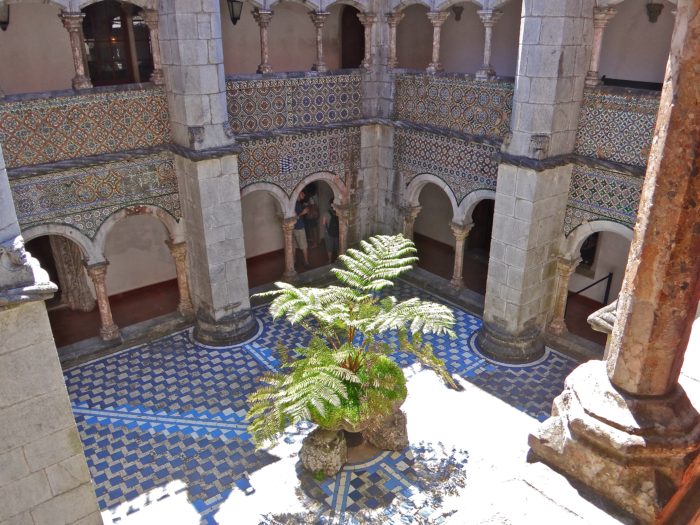 one of the courtyards inside the Moorish Castle 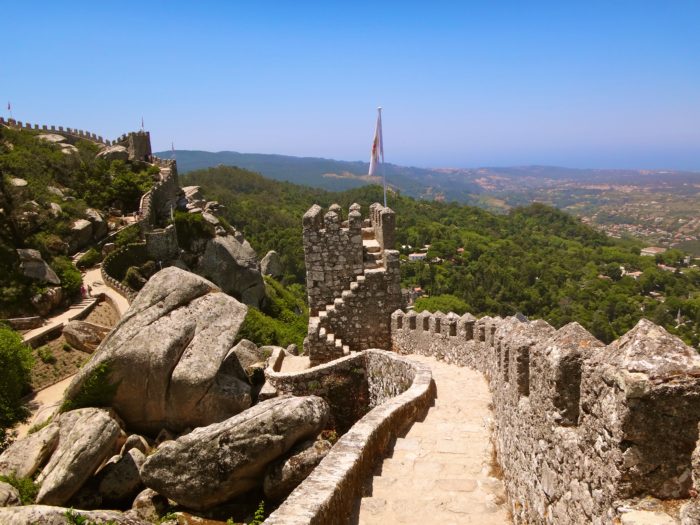 I ended at a time in the afternoon where all the tourist buses had left and not many taxis were around.  A fellow visitor told me it wasn’t a long walk down the mountain.  I threw my sandals over my shoulder and headed down on foot with a few others in front.  It took a little over an hour. 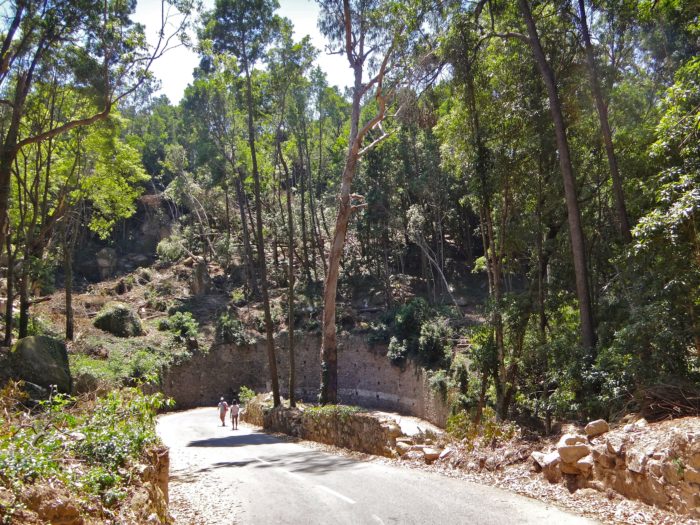 A Hotel in Florence Where Many Things Are...

The Best Part About Cinque Terre

[…] Don’t forget Sintra!  Many go as a day trip but I highly recommend spending more than a day here.  Read Sintra, More than Just A Day Trip […]

Thank you! Sounds like I should spend a couple of days here ?

absolutely. this was one of my first posts last year so not very informative for an itinerary and a bit unstructured overall 🙂 but you get the idea, its a beautiful place… 🙂