Deprecated: The $control_id argument is deprecated since version 3.5.0! in /var/www/wp-content/plugins/elementor/modules/dev-tools/deprecation.php on line 304
Be Better Than A Cruise Ship, The Walmart of Travel
Top Posts
Living in Italy Under Quarantine During Coronavirus
What and Where to Eat in Istanbul
7 Awesome Things to do in Musandam Oman
Best Hotel in Oman Is Six Senses Zighy...
Where to Go in Oman: A Must Visit...
Renovating or Buying Property in Italy? Read Our...
Home DestinationsNorth AmericaCaribbean Be Better Than A Cruise Ship 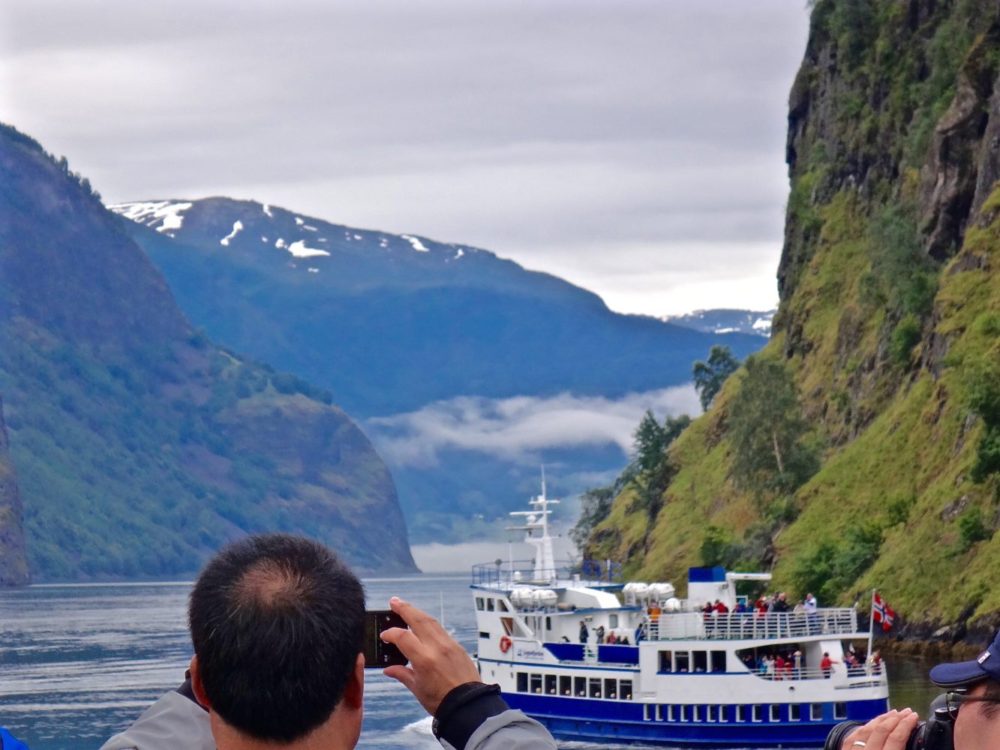 Be Better Than A Cruise Ship

I’m going to preface this seemingly insensitive post by saying my words are not aimed at seniors or those with health issues, disabilities or impairments.  It’s not meant to encompass destinations that are only seen by cruise ship either i.e. Alaska. Although a couple of the points below still very much apply.

I’m talking to you 4 countries in 6 days and 5 nights Mediterranean and Caribbean cruise ship goers.  Cruise ships are quite literally the Walmart of Travel and you should aim to be better than that.  Here are the reasons why:

A Cruise Ship Is An Unsightly, Floating Environmental Disaster

Aside from being a heinous eye sore and completely ruining views of coastline for natives and real travelers, cruise ships are the worst offenders when it comes to pollution.  On average, cruise ships use 140-150 tons of fuel per day resulting in the industry consuming millions of tons of fuel every year.  And produce almost a billion tons of sewage!  Exhaust and sewage can toxify air, taint water and contaminate sea life.   The result?  Negative environmental and health impacts to nearby inhabitants.

Did you know, by law, ships can dump treated sewage anywhere or even raw, untreated sewage as long as they’re three nautical miles out to sea? Read here. 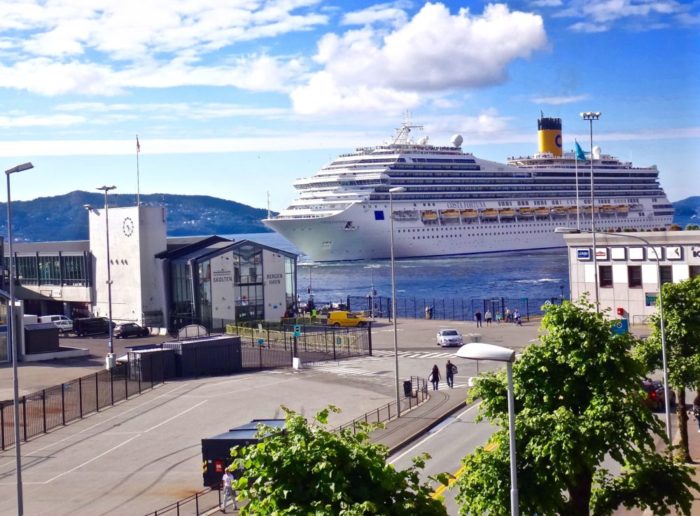 A mammoth eye sore coming to dock in Bergen , Norway

Are You A Tourist Cliche?

What is your purpose for traveling?  Are you interested in experiencing a new place?  Spending most of your time on a ship speaking with people from the same country and socio economic status while eating food prepared by the same chefs may not broaden your horizons in any way.

The few hours you get to roam away from the cruise ship exploring the same 4 recommended tourist sites or excursions are not going to provide you with an authentic experience.

A Cruise Ship Is Not A Safer Way to Travel

Cruise ship passengers are the easiest target for would-be thieves and hustlers.  What’s less difficult to spot than thousands of people disembarking a gargantuan white cruise ship docking at the port.  Whose going to risk missing their boat to file a report about some stolen cash and jewelry (or worse) at the local police station? How perfect.

Let’s not forget to mention that Health & Safety are big issues aboard cruise lines with numerous reported outbreaks of food poisoning.  Don’t forget spreading of disease and illness including Legionnaires’ Disease, Influenza, GI Illness and malaria just to name a small few.  Watch out for those funky unexplainable rashes and fungal infections too.

Your Hard Earned Money Is Going to A Big Corporation

Skip the Cruise Ship and Spread the Wealth.  Give to the non franchised.  Stay at the boutique hotel or other locally owned accommodation .  Eat at the restaurant a few blocks off the main road.  Buy a real souvenir from the native artisan. Your money has impact, think before you spend.

You are Totally Trapped

There are not many things more restrictive than being confined by space and a schedule while on holiday.  True there are more choices these days in cabin variety and some even quite swanky.  But your accommodation is probably the standard vanilla, claustrophobic cruise ship cabin.  You can always run to the crowded pool or slot machines on your ship I suppose.  The thought of not having opportunity to reroute or change plan is also frightening.  And what about having to constantly eye your watch every thirty minutes while exploring all so you can re-board your floating cage.  In short, cruise ships completely kill any freedom!

Finally, be weary of all inclusive bargain packages.  There are hidden fees everywhere.  Everything is considered an extra including activities, land tours and even food and beverage items.

The Best Travel Gifts for Her This Holiday...

Why Travel Blogging Is a Total Sham

Really interesting perspective on cruises, I wouldn’t have thought about feeling trapped because they’re just so big but that’s a great point!

Ive been on a typical cruising vessel once and I felt really claustrophobic. between the casino room and the crowded pool areas, it was kind of a nightmare 🙂

You make some excellent points here. It always seemed such a rushed way to ‘see’ places and so engineered. I couldn’t stand being trapped on a huge (quite scary) boat with the same people each day. I hadn’t thought about the fact that passengers are ripe for pickpocketing either. I can’t imagine ever fancying doing a cruise, even when I’m much older!

Yes, obviously I totally agree with all that you said 🙂 I just hope that my two legs are still in good condition when I’m older because God knows I’ll never want to stop traveling!

I have been on a cruise and it really just wasn’t for me. Like you say, you’re trapped onboard and I like to get out and explore. I also, generally just prefer a more authentic cultural experience. Thanks for raising awareness on the environmental impacts of cruise ships!

Thanks for sharing your experience. Ive had people tell me they loved cruising, especially if they had kids but they do acknowledge the environmental impact and shrug it off. To each their own I suppose 🙂

I’ve never done or really been interested in a cruise, but yikes, I didn’t realize how severe the environmental impacts are! Glad you are bringing attention to this. Not to mention the propensity for disease outbreaks…..I think I’ll steer clear!

Haha, tell me about it. food poisoning, legionnaires and fungal infections are just not for me! 🙂

I have only been on one cruise, and I loved it. Although it is not my fav way to travel. The part of harming the environment is not good of course…so hopefully they will work on fixing that issue..

Glad you enjoyed. I have had people tell me they love it, especially those traveling with kids. Hopefully we can all be in the position to choose where our money has less negative impact.

I can’t say I agree or disagree with you as I haven’t ever been on a cruise. Still wanting to try it out at least once. To each his/her own, I guess!

as they say, everybody should try something at least once? 🙂 i think thats the saying, haha

Cannot agree more with the post. I think the concept works well better with those seeking luxury holiday experience rather than the true notion of traveler. And the toll they take on environment is havoc. Thanks for picking on a burning issue of the day

Thanks for sharing your thoughts. I think its definitely important to highlight. As for the type of holiday, I wouldn’t even classify cruise ships as luxury… a lot of times its an inexpensive way to cram the whole Mediterranean in 5 days and 4 nights!

I really wish that cruise ships would work on being better to the environment, the pollution really is not acceptable even if it is technically legal.

I wish for that too. even so, i don’t think its fair to the local residents.

I totally agree with you!, ships are not the way of traveling and meeting new cultures!, I love to stay at a boutique hotel and have breakfast on the bakery around the corner and such! great post!

This is a post I wish I had written! When we travel we want to see the local spots, and cruise ships just seem to be in the way. It’s also hard to get to know the local people.
Great post!

Thank you! and Exactly!