Deprecated: The $control_id argument is deprecated since version 3.5.0! in /var/www/wp-content/plugins/elementor/modules/dev-tools/deprecation.php on line 304
The Anniversary of Senna at the F1 track in Imola, Italy
Top Posts
Living in Italy Under Quarantine During Coronavirus
What and Where to Eat in Istanbul
7 Awesome Things to do in Musandam Oman
Best Hotel in Oman Is Six Senses Zighy...
Where to Go in Oman: A Must Visit...
Renovating or Buying Property in Italy? Read Our...
Home Destinations The Anniversary of Senna 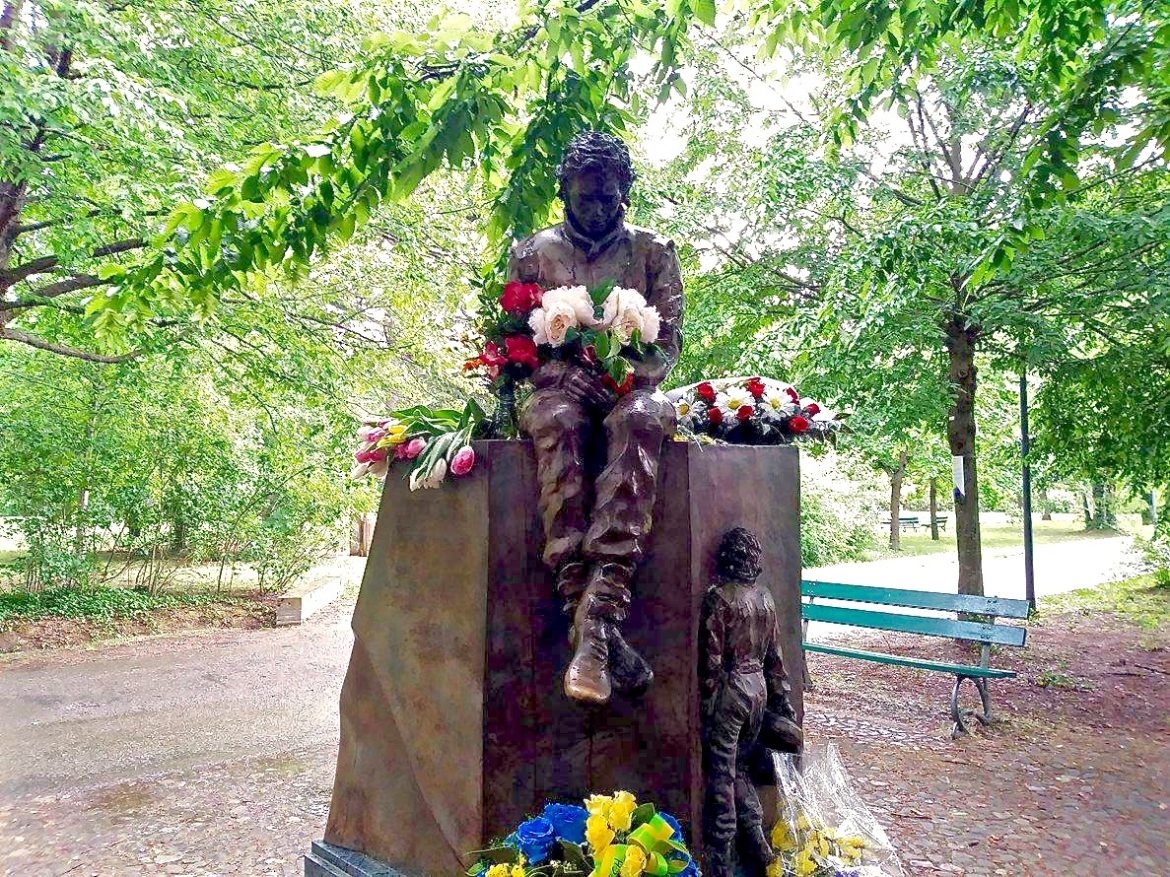 The Anniversary of Senna

A few years ago I didn’t know who the late Ayrton Senna was until it was the “Anniversary of Senna” on May 1st and a television news program covering highlights of his F1 racing career captured my attention.  I never had much interest in race car driving as a sport or idolizing athletes, however good looking they are.  But there was something about the footage of Senna. This curly haired seemingly petite but larger than life persona stopped my gaze from retreating to the computer screen, as it usually does every time sports coverage pops up on the evening news.

As the Anniversary of Senna segment continued, I noticed my husband also stopping to watch.  “Did you know this guy”? I said.  I got the C’mon, Are You Serious? look.  He told me the story of how he and his friends drove to the scene of Ayrton Senna’s death the day after he died.  “What do you mean drove“?  My husband replied that Senna died just twenty minutes from where he grew up.  On the F1 track in Imola in Northern Italy in 1994 during a Grand Prix race.  He recalled how the tragic death of the sport’s most highly revered driver broke the hearts of many Italians as well as the whole of Brazil, the country from which Senna descended.

As that week went on, we both downloaded and watched the documentary of Senna and various online clippings showcasing his life and death.  It was obvious Senna lived in a different world and with a different philosophy.  I immediately admired him.   So three years later (and just a few weeks after a relocation to my husband’s hometown in Italy) when the 23rd anniversary of Senna’s death rolled around a couple of days ago, we dropped everything to visit the defunct F1 circuit in Imola.

The Anniversary of Senna at the F1 Track in Imola

The circuit opens for walking to the public during certain days.  As we strolled down the track on the Anniversary of Senna to the exact point where his car crashed straight into a wall instead of turning, I learned that the turn had been rebuilt immediately following the race as it was deemed too unsafe by F1.  In reality, it wasn’t the turn itself.  The overall conditions of the track cemented its reputation as one of the world’s most dangerous.  Senna was not the first person to die here that weekend in ’94.

The track in Imola continues to host races but no longer hosts F1 Grand Prix’s.  It looks pretty dated actually.  I asked my husband why not and if it was because of Senna’s death.  He said yes and no, it was more to do with money as is the case with all sports.  The newer and shinier F1 tracks can now be seen in Abu Dhabi, Qatar and Shanghai whereas they were only held in Europe years prior.   It was hard to imagine this venue holding an event of such grand scale.

The F1 track in Imola was not how I pictured it.   The speedway looked shockingly narrow and the stopping points minuscule, so different from how it appears on TV.  I couldn’t imagine a car zooming down the tiny lanes at speeds of 300 km/hr.  Forget that the cars are inches apart during races clamoring for the finish line. 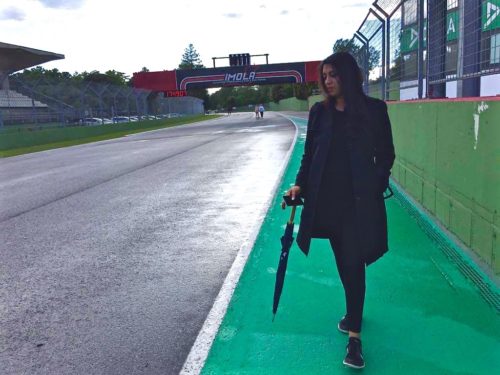 Starting of F1 Circuit in Imola

In Memory of Senna

We exited the track and walked to where a statue of Ayrton Senna had been placed, just outside that fateful and notorious turn.  Flowers, messages, photos, country flags from all over the world and old jerseys with Senna’s name written across lay on the ground and tied to the fences.  He was and is loved by many, not just for his racing abilities but for his salt-of-the-earth and of-the-people demeanor.  It was palpable.

I don’t have nostalgic childhood memories of watching Senna race down the track.  But I’m glad I learned about him and had the opportunity to pay tribute.  The Legend of Senna will long be remembered. 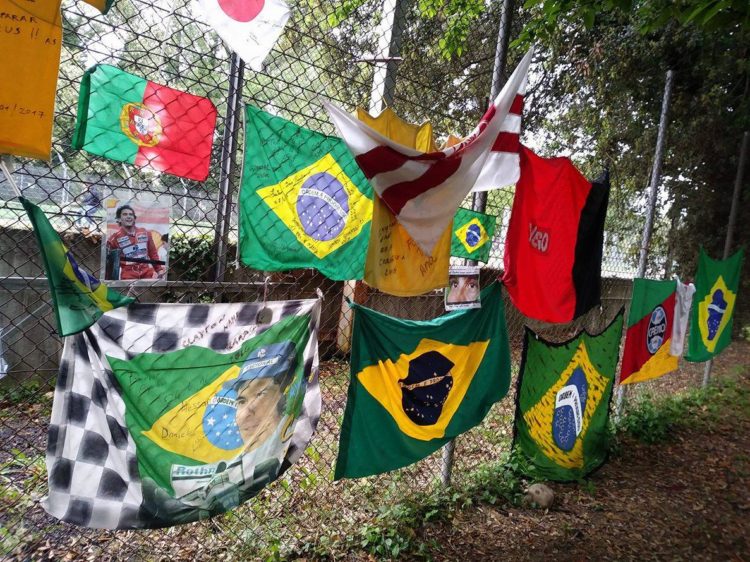 How many days in Tokyo Do You Need? Not that many!

Shipping Your Car to Italy? My Car Hates It Here

How the Famous FX Mayr Does Weight Loss

Shipping Your Car to Italy? My Car Hates...

Having A Baby in Italy

This post is so unique! It’s super cool that you got to walk on the track. I enjoyed reading this post. 🙂

I’d never actually heard of Ayrton Senna until this post believe it or not! I’m sure my dad would know as he loves racing. Unfortunate that he died!

I’ve never heard of him or the crash but I think it’s great how you shared your discovery of him. I didn’t know racing was such a big deal and to read how much his death has impact two countries just speaks out to his legacy. I’m glad you got to learn and discover more about him.

I had never heard of Ayrton Senna so thank you for introducing me to him and his life and legacy. What an experience you’ve shared with us and it’s great that so many others still remember him often and visit his memorial keeping him and his amazing career alive and in good spirits as we learn about him and continue to share.

Oh man, this must’ve been a very emotionally laden topic to have to write on, but that was really well done! I hadn’t known who Senna was either, but I imagine it must’ve been very touching to be there.

That’s crazy because my boyfriends name is Sina. What an inspirational blog post about remembering the good in someone! What an awesome way to remember someone by! So cool you got to experience that.

An interesting read. I have never heard of this before and you know what they say “you learn something new everyday” so thank you for that

I’ve never heard of Ayrton Senna before this post, but I clearly have to learn all about him. What an amazing experience to walk the track and see his memorial. When I’m back in Italy, I will definitely check it out

I had absolutely no idea who Ayrton Senna was until reading this article. I’ve seen races in bits and pieces on TV, but it would be amazing to see actually walk on the track. When I am next in Italy, I will definitely be checking this out!

This is so interesting as I knew nothing about Senna. I do know how people love their sports heroes though. They are almost idolized. Senna sounded worth of it.

I didn’t know about Senna until now. But he seemed to have left a great impression on people. Will now go read up on him. Thanks for this.

I grow up with a dad who loved F1 so I am very aware of who Senna is. (When I was little I used to call him Santa hehe) I really love how the opened the track in his memory. I was quite young when he died but I remember it being a big thing

haha, Santa.. too cute. Yeah, i felt a little bad when I didn’t know who he was. Your Dad must have been equally devastated with the news of Schumacher.

That was such an interesting read! I didn’t know of Senna until now! It must have been so special for you to actually be thereand experience that!

thank you, it was. always good to learn new things 🙂

That’s an interesting read. I have never heard about Senna myself but after reading this article, I’m going to look him up. You have sparked my interest!

Touching read. I knew nothing about Ayrton Senna so thank you for sharing!

What a beautifully written blog post. I remember Ayrton Senna and that actual race (not a huge fan of F1, but my dad is). It was shocking and yes, the mourning period was well justified. I didn’t know they’d made a memorial of him in Italy. Thanks for sharing.
You think that’s hair raising, see the streets of Monte Carlo get transformed into a F1 circuit! No actual race track, but when F1 comes there, they close Monte Carlo and use the actual streets as the race track!

I did not know that about Monte Carlo! – thought it was a proper track. Cant even imagine. makes me appreciate their guts and ability even more…